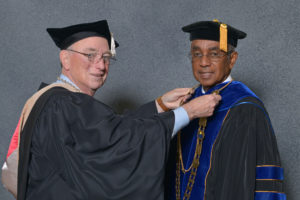 The ASU Presidential Investiture Ceremony was held at the Albany Municipal Auditorium in Albany, Ga. The ceremony included a formal procession and greetings from elected officials.

Steeped in history and tradition, a presidential investiture symbolizes the embrace of a new era for the institution and acknowledges the authority of a new leader, as well as, the official rights and responsibilities of the office.

Dunning was named president of Albany State University in November 2015 by University System of Georgia Chancellor Hank Huckaby. For two years, he led Albany State as the interim president, focusing on strategic direction, economic development and developing collaborations that enhance educational opportunities for the residents of Southwest Georgia.

“Dr. Dunning is a proven administrator, scholar and lecturer and has a distinguished track record for his contributions to higher education in Georgia and Alabama,” Huckaby said. “I believe no one is better suited for the job than Dr. Dunning. He is the right leader at the right time for Albany State University.”

Dunning is currently leading the consolidation process of Albany State University and Darton State College, along with DSC interim president Richard Carvajal. The new university will be the largest academic institution in the Southwest Georgia region, serving approximately 9,000 students.

“I feel privileged to serve Albany State University. This is a historic time and this is a significant time, not just in the life of these two campuses but in the life of Southwest Georgia,” Dunning said. “Moving forward, I expect administrators, faculty, staff and students at Albany State to aim high. We will be in a position where everything we do, we will measure ourselves against the best in the nation.”

Prior to his appointment at Albany State, he served as vice chancellor for International Programs and Outreach for the University of Alabama System in Tuscaloosa.

The Alabama native earned his bachelor’s, master’s and doctoral degrees at the University of Alabama.