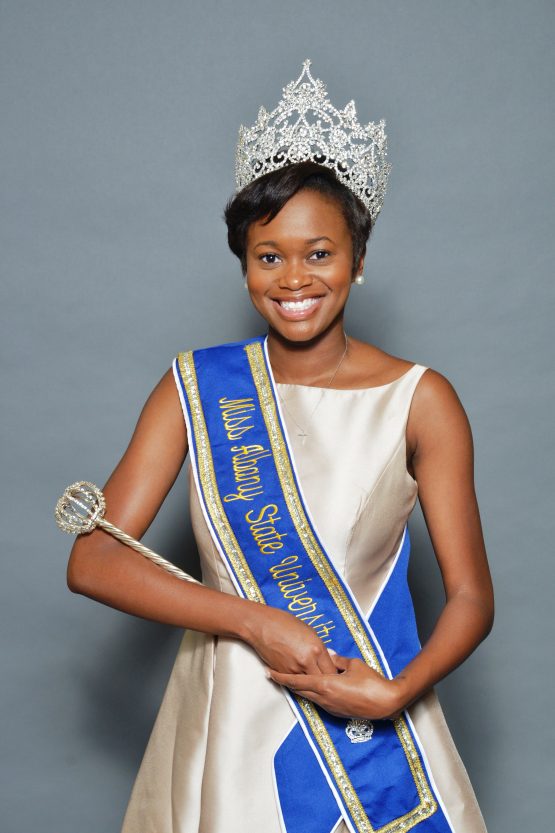 Merideth, a 22-year-old, sociology major from Columbus, Ga., will be in the April/May issue of Ebony, along with nine other campus queens from around the country. All historically black college and university (HBCU) campus queens will be highlighted in the September issue. The feature will allow Merideth to showcase her extracurricular activities, goals and community impact nationally and internationally.

Each year, Ebony magazine hosts an online competition for HBCUs nationwide to celebrate black collegiate women that promote empowerment, excellence and brilliance. Individuals were asked to vote up to three times within a 24-hour period for their favorite queen. Miss Albany State rose to the top of the leaderboard, coming in at number four out of the 10 campus queens chosen.

“Albany State hasn’t been represented in such a huge magazine for African-American people since 2010,” Merideth said. “Being able to bring promotion and a positive light to my institution really makes me happy.”

Merideth is a strong advocate of her platform, "Get Addicted," which reminds people that what consumes a life, controls a life. Not all addictions are negative, Merideth said. Her addiction happens to be education, as she is working toward becoming a teacher.

“She is an intelligent young woman who is deliberate in her decision making and is passionate about supporting others,” said Cynthia Evers, vice president of Student Affairs and Success. “She has a bright future ahead of her.”

Merideth plans to continue encouraging and helping others with her platform and hopes to impact the ASU campus and the Albany community. During her tenure at Albany State University, she has held many positions, including Freshman Class President,

Sophomore Class Secretary and Miss Student Government Association. Her scholastic honors include Alpha Kappa Mu Honor Society and Gamma Beta Phi Honor Society. Merideth has been a member of Girls Scouts of Historic Georgia for 13 years, as well as, an active member and volunteer of Girls Inc. for 14 years.